Back Switching to LED 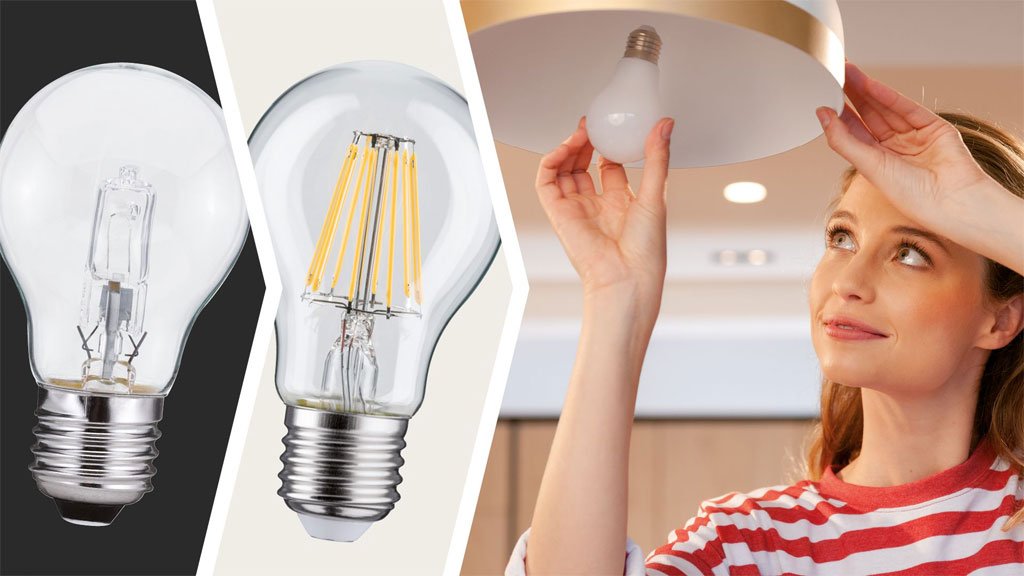 LED instead of halogen: Why the change is really worth it

For much too long now, LED had to take a back seat behind its big sister halogen. But those days are over now. Find out why a switch to LED is really worth your while and what you should know before you get started.

Switching to LED: Here you can find out more

2. Replacing halogen with LED: Save money and the environment

3. How do I choose the right LED to replace my halogen lamp?

5. Can I still dim my luminaires after the switch to LED lamps?

7. Outlier: Halogen recessed spotlights – how to make the switch easy

You will find a summary of the most important points in our Key Points for the Halogen to LED Switch-Over at the bottom of this page.

The halogen has long since been accepted as a slightly more cost-effective successor for the traditional incandescent light bulb, which was phased out and step-by-step been taken off the market entirely since 2009. Halogen lamps with their very similar warm white light and the fact that they were dimmable, soon replaced the old standard light bulbs in many homes.
But there was another light option that emerged at the same time: LED. Unlike halogen lamps, LEDs (or Light-Emitting Diodes) are not so-called thermal radiators that generate light with matching heat.
At first, LED lamps were undesirable because of their higher price. In 2016, however, the EU prohibited the sale of halogen lamps in the standard E27, E14 and other base versions to push the introduction of modern LEDs into households.

2. Replacing halogen with LED: Save money and the environment

But what exactly makes LEDs so much better than halogen? For one, LED lamps consume around 75% less electricity than regular halogen lamps. A switch from halogen to LED will therefore lower the energy costs for households, and make electricity bills a lot more manageable.
But LEDs don't just consume less energy. They also offer a much longer service life than their halogen counterparts: while a halogen lamp has an average life expectancy of around 2000 hours, an LED will reach at least 10,000 hours. In other words: if you were to switch on an LED lamp for 2.7 hours every single day, it would last for 10 years. And since LEDs have also come down in price drastically, they have a considerable positive effect on the environment and your wallet. 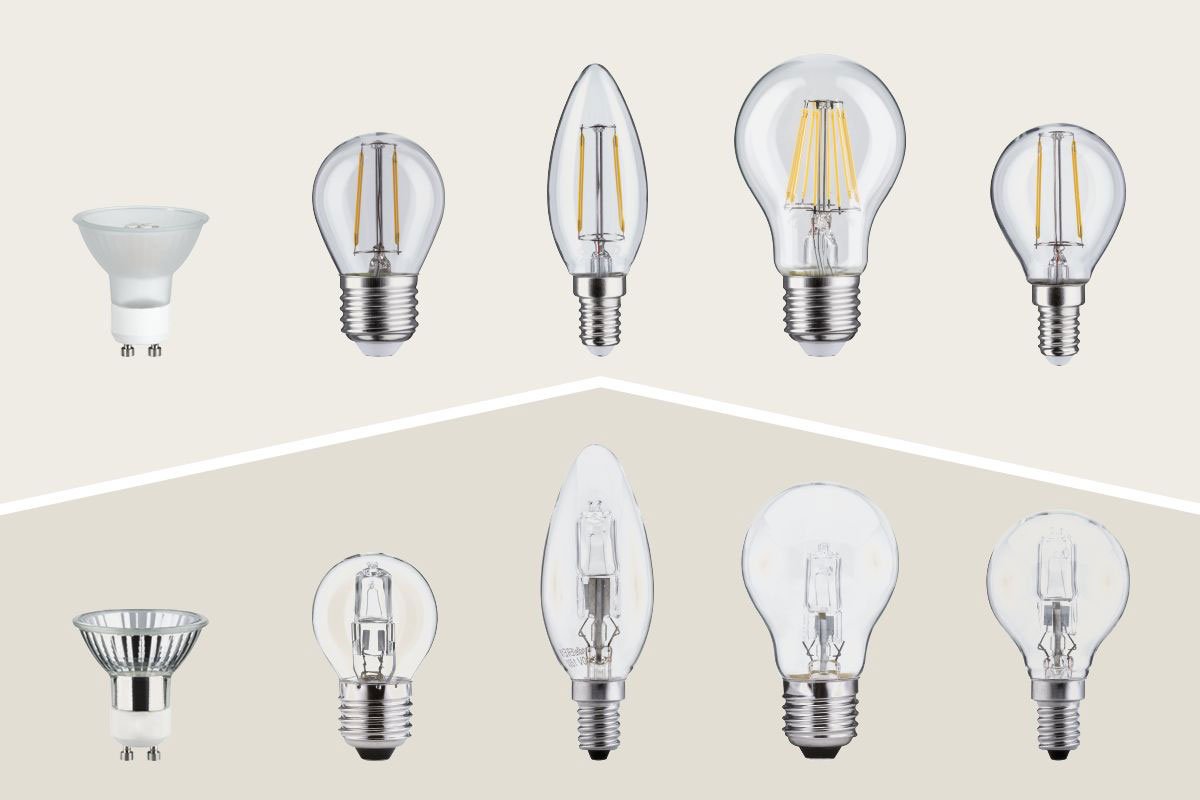 3. How to I find the right LED to replace my halogen lamp?

Once you have decided to go ahead with the switch, you still have to find the right LEDs to match your luminaires. That sounds more difficult than it is: Unscrew the old lamp from its base and use it as your guide. Every LED with the same base will fit exactly where your old halogen bulb used to be. That is because most LEDs are now designed for retrofitting, meaning in addition to the screw base, they also now have the same corn sizes.

Absolutely not. For a very long time, LED had a bad reputation. Their light was supposed to be too bright, too harsh and too cold. But LED technology has come along in leaps and bounds since then to meet the needs of consumers – now they shine with the same light colour as incandescent light bulbs: 2700 Kelvin. You can now also buy retro LED lamps with colour temperatures of just 1800 Kelvin – their warm, golden light is just like candle light and many people find it particularly attractive and comfortable.

5. Can I still dim my luminaires after the switch to LED lamps?

Many LEDs can be dimmed just like their halogen counterparts. They are labelled accordingly on the product packaging and you can access lists for compatible dimmer types. For some LED lamp types, i.e. those with the practical 3-step-dim function, a wall switch with dimming function has become completely unnecessary. They change brightness in increments by switching them on and off. And then there are smart LED lamps that are dimmable via remote control, voice control or app. 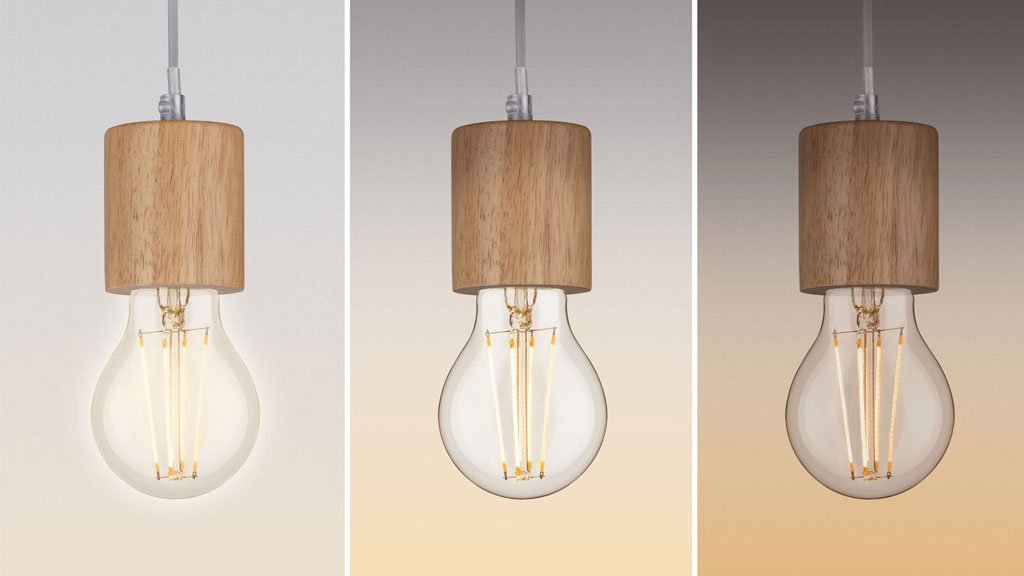 And there is so much more you can do with smart LEDs than just adjusting their brightness. An RGB or RGBW setting will create a unique ambiance for watching TV with the family, spending time with your friends or for a romantic evening for two.

7. Outlier: Halogen recessed spotlights – how to make the switch easy

The switch to new LED recessed spotlights is a little more complicated than just replacing a light bulb, but still not rocket science.
The key points at a glance:

You've got 6 recessed halogen spotlights and a transformer with a load capacity between 35 and 105 VA (or W). You go and purchase 6 new recessed LED spotlights with 8 W power consumption each. You would therefore have a transformer load of 48 W. The switch from halogen to LED will not be a problem. If, on the other hand, you originally only had 3 installed recessed spotlights, the new LED spots would only reach a total load of 24 W – which would mean you would have to buy a new transformer.

Watch our video with Jens, who will show you how you do the actual switch of your ceiling spots to bring your home up to speed.

Key Points for the Halogen to LED Switch-Over